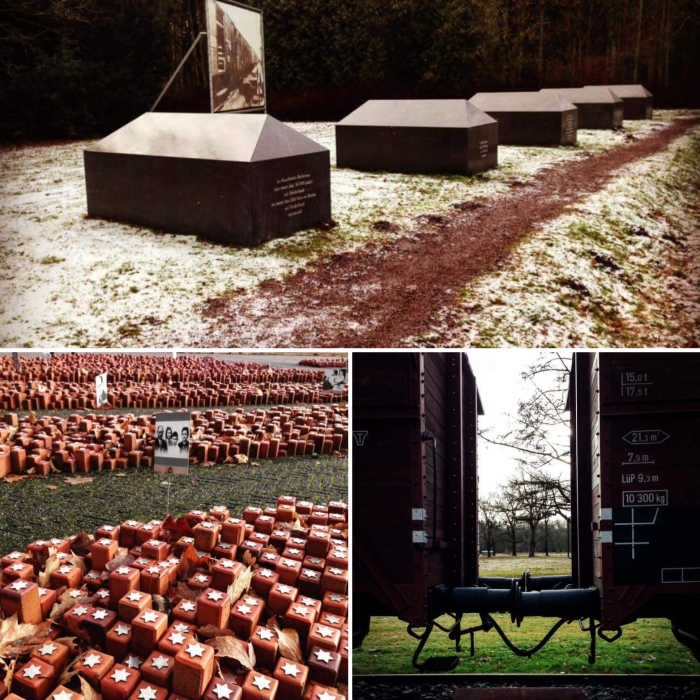 The Westerbork Transit Camp was originally a refugee camp for Jews fleeing persecution in Nazi Germany. Unfortunately, the Nazis took the camp over and transformed the once safe-haven into part of their regime of reign of terror. Gypsies and Jews from all over The Netherlands were rounded up and sent to Westerbork for transportation to concentration and death camps further east. Approximately 120,000 people were transported through Westerbork by the Nazis. The most famous of these was Ann Frank who was among the 60,000 people transported from Westerbork to Auschwitz-Birkenau near Krakow in Poland.

The original camp no longer stands but there is a moving open air memorial and a museum. The memorial is a public space that can be accessed for free by walking along paths through the woods from a nearby carpark. However, you have to pay entry to the museum, which includes access to a shuttle bus to the memorial. We pay for the museum, which is well worth it.

It’s a cold and bleak day. The first thing that strikes me at the outdoor memorial are the two railway carriages. Identical to those we saw in Auschwitz-Birkenau last year the sight of these carriages fills me with a sense of the horror that awaited those who transited through this camp. Not only does it make me think of what we saw in Auschwitz-Birkenau last year but now I also think about the long journey those who were sent there had to endure. Krakow is a long way from Westerbork. What makes this memorial even more moving is the roll call of the names of all the prisoners who were transported. You could probably stand here for a whole day and not hear them all.

Stones have been laid here to honour each of the individuals who transited through this camp. Almost all were murdered by the Nazis. Some died on the long train journeys, others of malnutrition in concentration camps, some by being shot and many in the gas chambers. Photos between the stones show the faces of Jews and Gypsies. It highlights the inhumanity that was shown to ordinary children, women and men who’s only crime was to be born into the wrong religion and the wrong place and time. The same crime committed by the Syrians and other refugees in the world today who are fleeing torture and death in their home countries.

Large coffins representing each of the camps to which Jews and Gypsies were sent line a pathway. Each names the respective camp and has inscribed the number of people who were sent there. The numbers are too large to comprehend. All are in the thousands. Some in the tens of thousands. It’s sobering and sad.

Leaving Westerbork we are both quiet. We’re not depressed just moved.