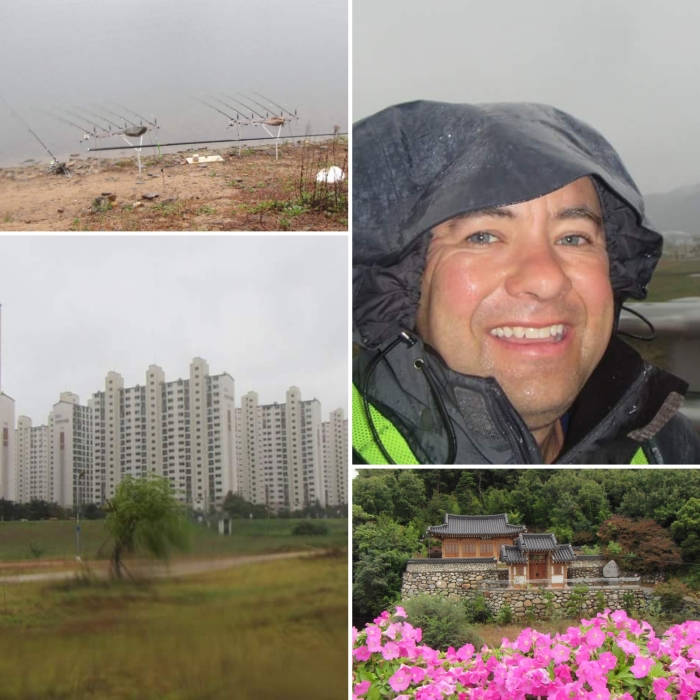 The rain is bucketing down outside the pagoda when I wake and I briefly consider laying in the pagoda for the day but that would be a bit soft and Daegu is calling. It’s only about 125km away and, while I’ve never ridden 100km in a day with a fully loaded bicycle the river path is flat and I am confident there will be a bed waiting for me at the Empathy Hostel despite my not having made a reservation. Besides, rain is only water.

Korean fishermen sit along the river in tents with coal barbecues, picnic tables and soju. Their fishing set ups are epic with at least six rods a piece sitting on fantastic rod holders, at least three crab (?) nets in the water and a multicoloured scoop net on the shore. These men are not just here to watch the scenery.

I reach Korea’s answer to Silicon Valley: Gumi. Through the rain I can see a sign proudly proclaim that LG Displays is the Global Number One display company. I guess it probably is if many Australian households are anything to go by. This section of the cyclepath is industrial as it travels through Gumi’s industrial zones. I also pass a typical Korean city residential area with numbered buildings. I wonder what life must be like to live in such places. Is it any different to living in a suburban house like many Australians do? How many rooms does an apartment have? How big is it on the inside?

After 95km of cycling I see Daegu sprawled out in the distance. The city is nestled between the mountains and river. It feels so close but what I don’t realise is that it will still be 5km before I reach the certification centre and then another 20km until I reach the city centre. But it’s only 2:30pm and this means I have time to make it to that warm dry bed and nice hot shower I have been daydreaming about. The cycleway into the city seems to end abruptly after about 5km leaving me with two choices: ride along crowded pedestrian footpaths that have a cycle lane painted on them or join the crazy traffic. I jam my helmet onto my head and select the latter as it will be much faster and, unlike the pedestrians, the traffic is only going in one direction. I don’t know from where I draw the energy to zip in and out of parked vehicles and sprint off from the traffic lights after the ride I’ve just done but somehow I find myself cranking down the road at speeds of over 30kph and throwing my 60kg loaded bike around as though it was built for trials. It’s worth it when the hostel has a bed and I enjoy a deliciously hot shower.

5 thoughts on “Sangju to Daegu”

Today we’re just hanging in the village. It has been snowing and between playing in the snow and hanging in the apartment with a view of the snow, we are happy chappies.
One of the many things I love about Germany is that people don’t seem to use weather as an excuse. They hike in the snow and even take their kids outdoors in sub-zero temperatures. It’s trucking down with snow here and we’ve seen a good dozen hikers passing through the village on their way someplace or other.
The snow arrived at the Black Forest today as we drove into Schonach im Schwarzwald. This is a cute town just near Triberg. We’ve rented a lovely apartment where we can relax for two nights.
Yesterday all those hills were green. It’s so pretty here.
One last look at the castle in the snow before we leave for the Black Forest
What more could we ask for?

I acknowledge the Traditional Owners of the lands through which I travel during my adventures, and pay my respects to Elders past and present.
%d bloggers like this: